After spending the first day in the cellars of Torgiano and Montefalco, continues the tour that Baruffaldi created for you at Cantine Aperte. 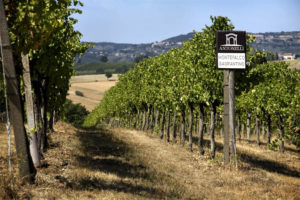 Awake and refreshed you will be ready for the second day in a tour through the Cantine Aperte of Umbria. All you have to do is jump on your motorbike and take the two most beautiful roads that run through Umbria, the Regional road SR316 and the Provincial road SP445 towards Bastardo. Your next stop is the Cantine Antonelli San Marco, which with its vines that cover the hills has always been a destination for lovers of good wine and good taste. Certified DOCG and with a vast production of types of wines the company has years of experience in viticulture. Right below the old manor house, in fact, is located the core of the company, the wine cellar, where day after day fermentation and subsequent pressing of Grechetto, Trebbiano and Montefalco, all strictly organic, are made. 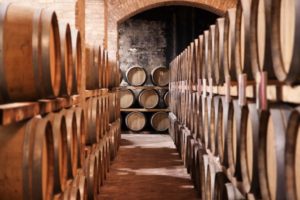 Always continuing on SR316, the famous Strada del Sagrantino, towards Bastardo, the Cantina Scacciadiavoli will welcome you for lunch. Founded in 1884, following the dreams of a Prince, and now owned by the family Bambuffetti, the company was designed since the beginning as a sort of modern establishment for wine production that was totally innovative for those times. Pie-eyed by the Sun, good wine and local good food we go through the last stretch of our itinerary among the beauties of Umbria. Again on the road SR316 towards Bastardo, turn on the SP445. It won’t be hard to find it, just follow the path of the vines in the hills until the Tenuta Terre de la Custodia. Where a production that follows the dictates of the traditional winemaking borrowed by Franciscan friars, is performed in a modern complex completely in step with the times. 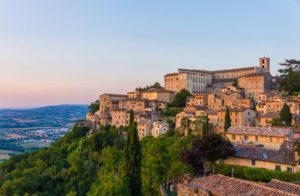 The itinerary, in the green heart of Umbria, cannot but be concluded by directing your wheels toward the beautiful Umbrian town of Todi, a gem perched on a hill where, according to the legend, there was an eagle to indicate the place to put the first stone of the city. Tourists and curious people’s destination will then be the Church of San Fortunato, which, despite being left unfinished, is one of the most important and unique churches of its kind. The heart of the city is Piazza del Popolo that embodies all the most beautiful monuments of the acropolis: the medieval Duomo, Palazzo dei Priori, the building of the Palazzo del Popolo and that of the Palazzo del Capitano.

If you still do not have enough of the many Umbrian beauties, then go down toward the Tiber from Todi, and along the SS448, passing by the picturesque artificial lake of Corbara, you will find yourself after a half-hour trip toward Orvieto. The city, with its Albornoz Fortress and its splendid Duomo with a Gothic facade made and decorated by more than 20 artists over the centuries, will end your two days with due diligence.

View the tour map
Day1: VISIT UMBRIAN VINEYARD’S CANTINE APERTE (OPEN CELLARS) 2017 – A TRAVEL WITH TASTE
Plus you are looking for to complete your style: coordinated items